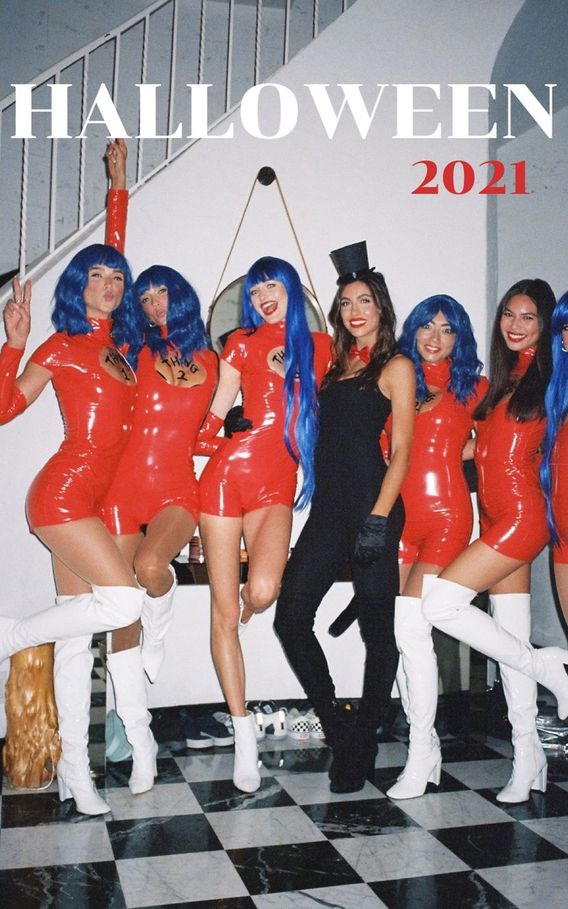 keep swiping for all the photos and all the links

Ah, Halloweekend in Los Angeles. You’re either in or you’re out, and we decided to fully participate this year. Whitney and I even ordered our costumes in late September which was a nice change from the usual last minute Amazon prime costume scramble I typically partake in. Our group Astro costume last year was such a success we knew we wanted to create another squad costume and the THING idea couldn’t have been more fitting for our girl group. After a few alterations to number the costumes 1-8 and Sami’s last minute Cat in the Hat ensemble (also please disregard Amanda’s wiglessness) we were ready to hit the LA Halloscene. We bounced around all night looking identical and it was a total hoot. Halloween tip: if you can manage to convince a group of friends to assemble to do a coordinated costume, studies show you have 10X more fun.

I’ll let you in on a game-changing Halloween costume tip. Sure it’s Halloween and anything goes, but no one really wants to be fully nakey, especially when it’s freezing out. There are these miracle tights, they’re the ones that the Hooters girls wear. They’re dirt cheap, they smooth you out, hold you in and give you a glowing tan. Pre order yourself some now and thank me in 2022. Also full credit to The Skinny Confidential for first sharing this secret on her blog!

Tap to my TikTok recap from our night being THINGS

Exhibit A, default pilot costume came out on Friday

When I first met Zack he informed me of his stance on Halloween - that he refused to put effort into a costume and that he would be, by default, a pilot every year for the foreseeable future. And sure enough, unless I take it upon myself to put together an alternate ensemble for him, that’s what tends to happen. Well this year I decided I would take matters into my own hands, and while it took a lot of convincing, I managed to throw together a non-pilot couples costume that he agreed to put on (it was up in the air until day-of if he would actually wear it or not). Did I plan the entire idea around my costume? Yeah, maybe. Whitney and I wanted to be Buzz Lightyears last year but the costume was sold out. But let’s focus on the fact that I got Zack to retire the pilot for 1/2 of Halloween this year! I’ll take the W. If you saw Woody and Buzz Lightyear making out on Saturday night, that was us.

Watch the TikTok I made from this night (it went sorta viral!)

Or watch it on IG Reels below!

I’ll be hibernating until next year!