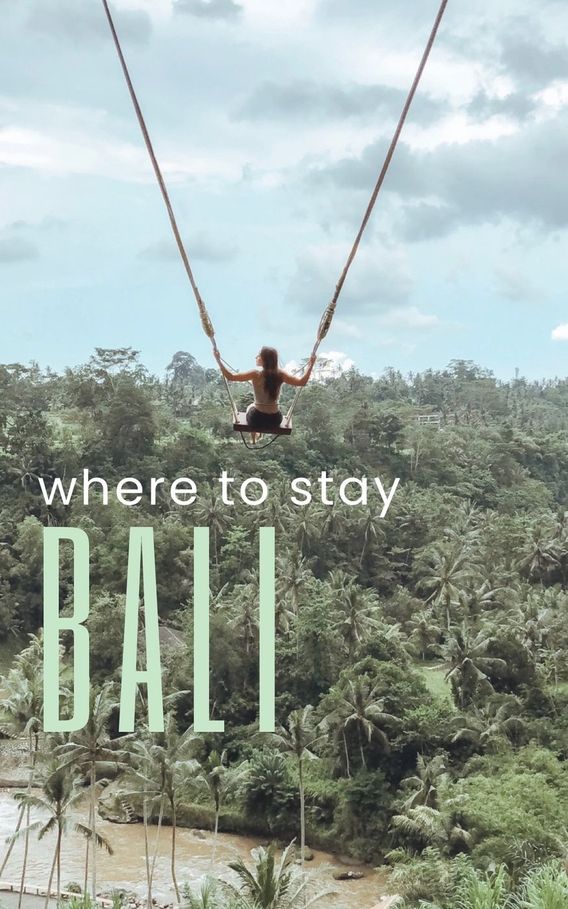 Ah, Bali. The lush tropical paradise on every traveler’s list, with the freshest vegan food, the kindest local people, and some of the world’s most desired waves. If I had to name my favorite place in the world, it would certainly be this very special island. Read on as I walk you through the most popular towns in Bali, offer a few tips for getting around, and provide you with links to all of the gorgeous places we stayed.

In our opinion, the best way to experience Bali in terms of accommodations is through AirBnB, especially if you’re on a budget. It allows you to stay in some insanely beautiful villas that you’ll have all to yourself for a cheaper price point than the crazy resorts you see on Instagram (but still just as IG-worthy), and you’ll be able to interact with the most gracious, local villa hosts that you’ll ever meet. I mean, we’re talking at-your-service, will-arrange-anything-for-you. Seriously, the kindest people in the entire world.

Tip #1: Make sure to have your AirBnB host arrange a pickup for you from the airport to the villa. Many of the homes are tucked away and not well marked with house numbers, so they’re usually pretty hard to locate upon first arrival depending on where you book (especially if you’re checking in after the sun goes down). You’ll also feel more comfortable with the villa’s driver who will be familiar with the place, rather than trying to find your way with a taxi.

Tip #2: If you’re feeling confident enough to drive a motorbike, ask your host to rent a bike and helmets for you in advance. That way, you’ll get the best pricing for your bikes and you’ll be ready to explore as soon as you arrive.

Don’t stay in Kuta! But really, don’t. It’s not completely bad depending on what you’re used to, but you’ll have a WAY better outlook on Bali if you just don’t. That being said, I wanted to put this on the list because I have a funny story to share - and we actually ended up staying in a decently “cool” spot.

Story time. On our first trip to Bali, I was in charge of booking our AirBnBs, and I completely messed up…

To give some context to the story, we were booked on a red-eye flight from Los Angeles that left at 10pm with an 11-hour layover in Shanghai, and arrived in Bali technically two days after we left LA. Which is already confusing with all the timezone differences (or maybe that’s just me), but to make matters worse, I was trying to book the AirBnB properly, given their 3pm check-in time, so that we’d be able to head right to our place when we landed in Bali at 2am. I was thinking too hard into the time and day differences and ended up booking our AirBnB check-in time for 12 hours after we had landed… So imagine Ryan and I: tired AF, sweaty AF, greasy as a skillet after bacon (okay, I was the only greasy one) after traveling for over 20 hours to get there. And I had ONE job… sorry, Ryan! Did I mention it was 2am? And our first time ever in Bali? So, there were barely any taxis on the road and everything was closed… but honestly we were just laughing about the whole thing (because Ryan is the best) and we hopped right into a somewhat sketchy Uber and made our way to the 100% sketchy town of Kuta, which is the closest city to the airport. After being dropped off at a few different hotels in an attempt to find a room for the night, we made our way to the trusty ‘ol Best Western like the good Americans that we are. I’m just kidding – B-dub was literally the only place open that actually had a room to give us. And surprisingly enough, the next morning (while we waited for our 3pm check-in time for our AirBnB) we hopped up to club B-dub’s rooftop bar with a young DJ who was spitting the sickest tracks to an empty pool deck that overlooked the ocean. I meeannn, not bad for a late-night decision in a seedy area of the island, amirite?

Our FAVORITE spot in Bali! We love Canggu; so much so that we stayed here twice during our first trip to Bali and exclusively during our second and third trips to the island. Being from Orange County, we gravitate towards the beach towns, and Canggu certainly did not disappoint. Not as loud and rambunctious as Seminyak but with just as much spunk, Canggu is a laid-back surf town alongside Bali’s beautiful beaches and trendy spots when you don’t want to stay in the middle of the “scene”. Ryan’s favorite surf spots in Canggu were Echo Beach, Old Man’s, and Berawa Beach, which are all conveniently located next to some really great spots to eat and drink after a day in the water!

IG-Worthy Bungalow Close To The Beach

We’ve never stayed in Seminyak but I figured I’d put it on the list, especially if it’s going to be your first time in Bali. Arguably one of the most popular places to stay, Seminyak is located where all of the action is – the most popular bars, foodie hot spots and streets lined with Australian fashion boutiques. Seminyak has more of that “downtown” vibe, but in an island sort-of-way. There isn’t actually a reason why we didn’t stay here – we simply just wanted to be closer to the surf in Canggu, but we did spend a lot of time eating, drinking, and shopping in and around Seminyak.

Where we would stay:

Manicured Villa In The Center Of The Action

The dense, jungle-y town of Ubud is perfect for those who want a quiet retreat with a true yogi vibe. You’ll find lots of culture in Ubud, which is such a beautiful thing to experience. Ryan and I got the chance to watch the traditional kecak dance and learn more about the spiritual side of the locals, and we loved how relaxing the entire town felt.

The one place we intentionally did not venture into was the infamously wild Monkey Forest, mostly because of my deep-down fear of primates. Instead, we got a personal tour of the beautiful Tegallalang Rice Terrace from a local that we befriended while we were staying in Canggu, and as part of a surprise trip that I had arranged for Ryan, we rode elephants on a sanctuary that was located just a short drive outside of town. After we rode the elephants, we headed over to the IG-famous Bali Swing to take some basic b*tch pics of us swinging over the trees of the lush forest. (Note: there are three swings here and a few life-sized bird’s nests that you can take pictures in. Warning: you must pay a moderate price to get in and it was definitely FULL of tourists, including us).

We booked our stay at an awesome place right on the sand in Uluwatu for a few days during the Balinese Hindu celebration of Nyepi, which is otherwise known as their “silent day”.

During Nyepi, you aren’t allowed to be outside of the house, even as a tourist, and they actually have policemen patrolling all areas of the island to make sure of this (they will fine you if you’re caught outside). However, because it was Nyepi, we were lucky enough to see the traditional parades and performances in the local communities, where they told stories about their gods vanquishing the evil ogoh-ogoh, in the form of skits and handcrafted floats made out of bamboo, flowers, wood and styrofoam, much like the floats that you see in New York at the Macy’s Thanksgiving Day Parade.

While we were in Uluwatu, we also went snorkeling on the beach right outside of our AirBnB and saw some really cute fish! Overall, Uluwatu is a quiet and mellow town with not a lot going on, but if you’re into surfing, you’ll need to check out Padang Padang and Dreamland while you’re there.

The Gili Islands are technically not a part of Bali itself, but I wanted to put these tiny little islands on here because they’re a popular spot about an hour off of the coast that you can travel to. We decided to venture over to the Gili Islands by boat during our first trip to Bali and ended up staying on Gili Trawangan (the largest of the three Gili Islands). I’ll be honest, Gili T was not our favorite place to spend time, but it would definitely be fun if you’re young, single and ready to mingle – and I’ll just leave it at that. The hotel where we stayed was pretty cool with some very gracious workers, and the island did have some beautiful over-the-water swings that made for great pictures. Next time, I’d definitely be interested in checking out Gili Meno and Gili Air if we ever venture that direction again – I’ve heard some great things about them!

And that pretty much wraps it! If you need any additional information or recommendations on places to stay, leave a message in the comments so we can connect :)