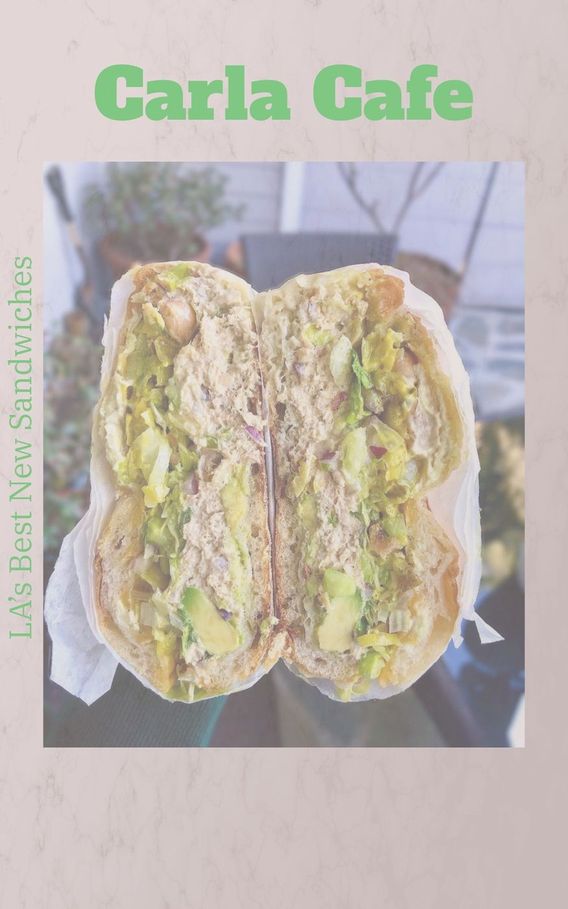 To my fellow Angelenos!

Carla Cafe is one of, if not THE best sandwich you will ever eat. Carla Cafe was created during the pandemic by Avi Ahdoot, in need for quick cash.

Avi had his own recipe that he had mastered for personal consumption and when him and his girlfriend started sharing to social, there was an immediate request to buy his sandwich.

Shortly after realizing he was sitting on gold, he started slanging sandwiches from home until they moved to a new kitchen at Bootsy Bellows, a tip night club in LA. Pretty good press guys!

Swipe through to see photos, location and links to order.

Like so many of us, when the lockdown hit in March, Avi Ahdoot was left thinking one thing: “Now what?”

The former tech worker had spent the majority of his 20s in the start-up world, working on an iOS app concept, but was suddenly faced with the need for supplemental income. The obvious pivot? Sandwiches, of course.

“I started making this aioli chicken sandwich at home. It was just something I’d wake up craving and couldn’t really find at nearby restaurants, so I started playing around with the recipe,” Adhoot says. “My girlfriend posted pictures of the sandwich on her Instagram, and immediately, friends and family began reaching out asking where they could buy it. I knew then that, at some point, I wanted to see if I could actually sell these things.”

Turns out, he could. Launched out of his house in May, Carla Cafe - named after the street he lives on - became a social media sensation. Now, it’s a counter pop-up in West Hollywood and home to some of our favorite new sandwiches in LA. Working with a team that now includes three additional cooks, his girlfriend Jessica Horell running front of house, and Mallori Lari, a close friend who was furloughed herself in late spring, as Director of Operations, Carla Cafe has moved into the kitchen at Bootsy Bellows, a well-known nightclub on the Sunset Strip, where they’re doing sandwich drops three times a week.

Or should we say sandwich - singular. They only make one kind each day (which they announce on Instagram), but just know that whether it’s pesto chicken, tuna chop, or garlic aioli chicken, you’re in for an absolutely tremendous lunch. All pre-ordering is done through DMs on Instagram, so give them a follow and stay diligent - time slots fill up fast, and believe us, you don’t want to miss it.

Garlic Aioli Chicken - This is the sandwich that started it all, and still our favorite. We could point to the quality of vegetables, the perfectly cooked chicken, or a ciabatta bun that’s so crunchy you can hear someone bite into it a block away, but what takes this sandwich to the next level is the house-made garlic aioli. We’ve now gotten to the point where we just order it as an extra side, so we can dunk other things into it throughout the week.

Tuna Chop - Far from your regular tuna sandwich, this thing’s loaded with so many fresh vegetables, at certain points you’ll wonder if this counts as eating a salad. Be kind to yourself and just say yes. And then blissfully bite back into that crunchy ciabatta bun.

Pesto Chicken - While there are some very obvious similarities to this sandwich and the garlic aioli chicken, there are some key differences, too. Namely, fresh pesto and sun-dried tomatoes that give the whole sandwich a sweet, herbaceous flavor. If you want to take the whole thing up even a notch further, order an extra side of the garlic aioli to dunk it in. Trust us, you will not regret it.