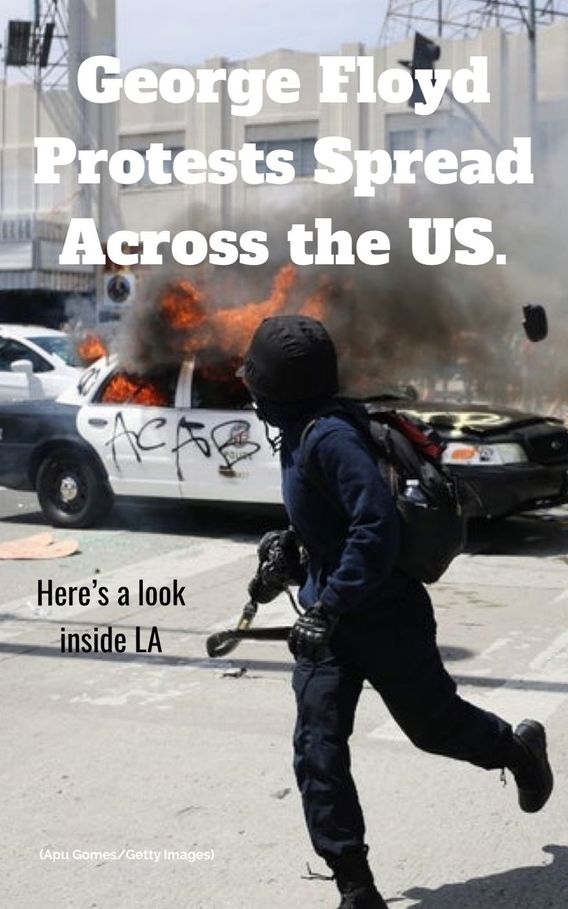 More than 500 arrested in chaotic night of protests in downtown L.A. over killing of George Floyd

Demonstrators marched through the streets of Los Angeles’ Fairfax District and surrounding areas Saturday in a fourth day of local protests over the death of George Floyd.

What appeared to be thousands of people converged by the Pan Pacific Park near The Grove, the Beverly Center and other major streets in the area around noon. For hours after, past 6 p.m., protesters marched through streets and at times clashed with police.

Following the announcement of an 8 p.m. curfew throughout the city of L.A., the Los Angeles Police Department declared gatherings in the Mid-Wilshire area an “unlawful assembly.”

“Those on the street are to leave the area immediately,” the agency said in a tweet.

Along Third Street near Fairfax Avenue, police officers formed a circle and were surrounded by dense crowds of protesters just after 2:30 p.m. with more than a dozen police vehicles lined down the street. Officers and protesters engaged in a tense standoff in an area where some climbed onto buildings, a commuter bus and a billboard. Sky5 was overhead as protesters gathered and marched.

At the intersection of Third and Fairfax, footage on the ground captured police shooting projectiles at a crowd and using batons. The Associated Press reported police in L.A. were firing rubber bullets, which a protester also told KTLA.

“But now all of a sudden you have people who are starting to get violent, which is the cops, and then what are we supposed todo?” the protester said, speaking from the Fairfax District. He did not give his name.

“You shoot rubber bullets. You shoot tear gas into a crowd … and how am I supposed to react?”

At one nearby intersection, people smashed the windows of a police car and spray painted it before it went up in flames. Crowds of people dispersed and ran from the car as billows of smoke and flames rose from its roof.

Outside the Beverly Center, protesters march through the streets of central L.A. on May 30, 2020, as part of nationwide demonstrations after the killing of George Floyd in Minneapolis. (KTLA)

L.A. Mayor Garcetti announced a curfew would be in effect for downtown Los Angeles between 8 p.m. Saturday and 5:30 a.m. Sunday. But officials later extended the curfew to the entire city.

The night before, a third evening of protests in downtown Los Angeles turned chaotic amid nationwide unrest over the police custody death of George Floyd in Minneapolis. They ended with the arrest of more than 500 people, authorities said.

Many businesses were looted, several police vehicles were vandalized and six LAPD officers suffered injuries ranging from lacerations to impact wounds, the department said. Some also set fireworks in the street.

“Last night was a dark reminder of the perils of a society in turmoil and how our people stand to support peaceful expression while being ready to protect the rights of all,” LAPD Chief Michel Moore said.

LAPD did not have an estimate on the damages, but some advocates worry about the harm done to small businesses owned and run by people of color.

Many have been peacefully protesting against police brutality over the past three days, at times blocking the 110 Freeway. But around 6:40 p.m. Friday, some demonstrators began to strike patrol vehicles near Fifth and Olive streets.

The protesters ran when officers gave chase, aerial video from Sky5 showed. One officer was swarmed by protesters after pushing a fleeing civilian into a car. That officer managed to escape.

LAPD quickly subdued the skirmish, but by 9:24 p.m., it declared an unlawful assembly citing “repeated acts of violence [and] property damage.”

Videos from other parts of downtown show several stores being looted, including a jewelry shop, and at least one police car in flames. The LAPD chief tweeted an image of a Starbucks location with its windows and door broken.

“I am asking for all of Los Angeles to come together and find the ability to peacefully express individual and collective grievances while also maintaining the safety of all of Angelenos,” Moore said in a statement earlier Saturday.

Like Moore, L.A. Mayor Eric Garcetti and other local officials have expressed support for the public’s right to protest but asked them to do so peacefully.

Fontana, Rancho Cucamonga, Oakland, San Jose and dozens of cities elsewhere in the U.S. saw similar demonstrations as anger boiled over what happened to Floyd, a black man who died Monday after a white Minneapolis police officer was video-recorded kneeling on his neck while Floyd uttered “I can’t breathe.”

That officer, Derek Chauvin, was swiftly fired along with three other officers involved and has been charged with murder.

Some Angelenos said Floyd’s death was a reminder of the police beating of Rodney King nearly 30 years ago.

“It’s worse today than it was back then,” Kerman Maddox, who lived near the center of the riots in 1992, told the Los Angeles Times.

In a statement Saturday morning, L.A. Council President Nury Martinez said, “…please protest, please march, please speak out, please cry out to racism’s injustice, including in our police departments, and please do so loudly, but please do so peacefully.”

LA Mayor Garcetti calls for National Guard help: 'This is no longer a protest. This is destruction'

Los Angeles Mayor Eric Garcetti said the California National Guard is being deployed to Los Angeles overnight Saturday as the nation's second-largest city faces another night of rioting in response to the death of George Floyd.

"The California National Guard is being deployed to Los Angeles overnight to support our local response to maintain peace and safety on the streets of our city," Garcetti tweeted late Saturday night.

“This is no longer a protest,” Garcetti told local media Saturday night.“This is destruction. This is vandalism.”

“I will always protect Angelenos’ right to make their voices heard — and we can lead the movement against racism without fear of violence or vandalism,” Garcetti said in a statement Saturday.

“The vast majority of people taking to the streets are doing it peacefully, powerfully, and with reverence for the sacred cause they’re fighting for,” he continued. “This curfew is in place to protect their safety — and the safety of all who live and work in our city.”

In L.A., rioters on Wednesday night at one point were seen burning an upside-down American flag.

The protests and riots broke out across the nation after Floyd died in Minneapolis police custody Monday.

An employee at a grocery store called police and accused Floydof trying to pass a counterfeit $20 bill. Floyd, who is black, was then arrested and handcuffed by Officer Derek Chauvin, who is white, and pushed to the ground.

Chauvin and three other officers were fired Tuesday in connection with Floyd's death, then Chauvin was arrested Friday on murder and manslaughter charges.

A cell phone video shows Floyd’s head is turned to the side and he does not appear to be resisting. Chauvin had his knee pressed to the back of Floyd’s neck for several minutes as Floyd is seen gasping for air and begging Chauvin to stop. He does not. Bystanders say they also heard shouting at Chauvin to take his knee off of Floyd’s neck.

Chauvin was charged Friday with third-degree murder and manslaughter in Minnesota.

The George Floyd incident  was absolutely uncalled for, however 2 wrongs don’t make a right.

We need to unite as Americans, figure out solutions to solve problems and not make the problem BIGGER.

Our hearts go out to the Floyd family for this terrible,  unnecessary  act of racism.

We must stand together and fight for what we believe in, but not burn our homes to the ground. Finally as things were getting close to opening up again after a long 3 months of the Coronavirus Pandemic, many small business are now even more hurt due to the unnecessary destruction of our beautiful city.

Let’s put an end to this way of demonstrating what we want done and move closer to a different solution. A solution that our future can be proud of!