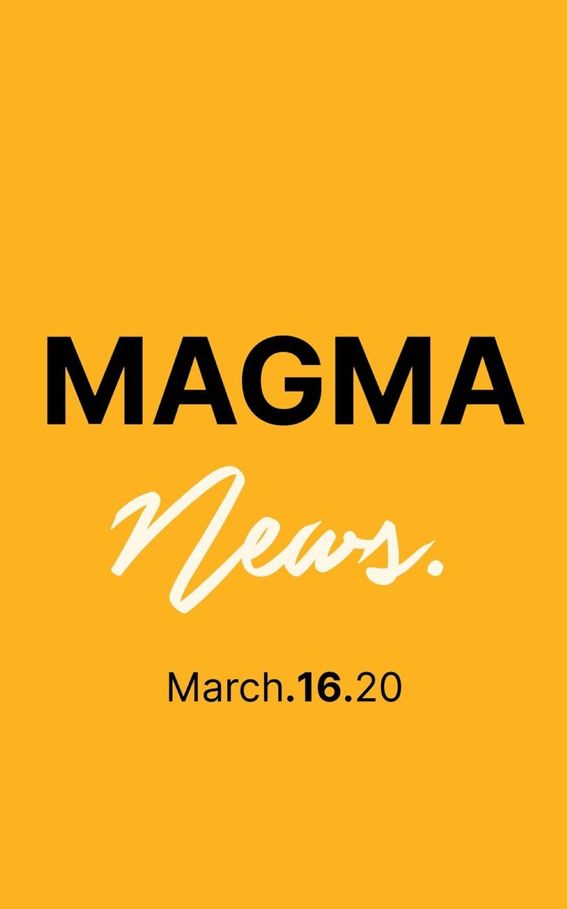 Publisher
MAGMA.
@Magma
Caption
Magma News | March 16, 2020 -Alibaba co-founder Jack Ma has sent the first shipment of surgical masks and coronavirus test kits to the US. -Trump urges U.S. to halt most social activity in virus fight, warns of recession. -NFL says April Draft still on. Closed to the public. -Penguins explore Shedd Aquarium during coronavirus closure. Gives the world a much needed break on the internet. -How the coronavirus spread from animals to humans? Check back every Monday, Wednesday & Friday.
Genre
News
Published
Mar 17, 2020
02:27 AM
Getty Images

Alibaba co-founder Jack Ma has sent the first shipment of surgical masks and coronavirus test kits to the US.

The Chinese billionaire tweeted two pictures of the pallets of goods being loaded on to a plane in Shanghai.

Earlier this month he said he would give 500,000 testing kits and one million masks to America.

Mr Ma is also sending consignments of medical supplies to Europe as he called for international cooperation efforts to combat the pandemic.

In his first tweet, Asia's richest person posted photos of a China Eastern Airlines jet being loaded with boxes of coronavirus test kits and face masks as they were shipped to the US.

It comes after the Jack Ma Foundation and the Alibaba Foundation last week announced that they had prepared 500,000 testing kits and 1 million masks to be sent to America.

They also said that they had already donated supplies to other countries including Japan, South Korea, Italy, Iran and Spain, with two million protective masks pledged for distribution across Europe.

The first consignment of 500,000 masks and other medical supplies such as test kits, which was destined for Italy, arrived in Belgium on Friday.

He joins other high-profile technology executives in pledging support for coronavirus research and disease prevention.

Microsoft co-founder Bill Gates, who is the world's second-richest person, has announced that the Bill and Melinda Gates Foundation would give $100m to help efforts to stop the spread of the virus.

On Friday Mr Gates announced that he was stepping down from Microsoft's board to spend more time on philanthropic activities. He said he wanted to focus on global health and development, education and tackling climate change.

WASHINGTON (Reuters) - U.S. President Donald Trump urged Americans on Monday to halt most social activities for 15 days and not congregate in groups larger than 10 people in a newly aggressive effort to reduce the spread of the coronavirus in the United States.

Announcing new guidelines from his coronavirus task force, the president said people should avoid discretionary travel and not go to bars, restaurants, food courts or gyms.

As stocks tumbled, Trump warned that a recession was possible, a development that could affect his chances of re-election in November. The Republican president said he was focused on addressing the health crisis and that the economy would get better once that was in line.

“We’ve made the decision to further toughen the guidelines and blunt the infection now,” Trump told reporters at the White House. “We’d much rather be ahead of the curve than behind it.”

Trump has faced criticism for playing down the seriousness of the virus in the earlier days of its spread.

He has sought to portray a competent, coordinated government response in recent days while conceding on Monday that the virus was not under control.

That contrasted with his remarks only a day before, when he called the virus contagious but said the administration had “tremendous control” of it.

“I’m saying we are doing a very good job within the confines of what we’re dealing with,” Trump said when asked about his “control” comment from Sunday. He said his remark then referred to his administration’s response. “If you’re talking about the virus, no, that’s not under control for any place in the world.”

Asked to grade his response on a scale of 1 to 10, Trump gave himself a 10. Critics disagree.

Trump said the worst of the virus could be over by July or August, a more specific and lengthier timeframe than he has previously suggested. He called it an invisible enemy.

“With several weeks of focused action, we can turn the corner and turn it quickly,” he said.

The president’s advisers implored young people to follow the new guidelines to avoid spreading the virus even though they were at lesser risk of a severe case if they contract it. Older people, especially those with underlying health problems, are at the greatest risk if they develop the respiratory disease that has now killed more than 70 Americans.

Birx said if Americans followed the new guidelines, the United States would see a dramatic difference in the outbreak’s trajectory.

Health officials are hoping the measures will help spread new cases over a longer period of time so as not to overwhelm the U.S. healthcare system as has happened in Italy.

Trump said a nationwide curfew was not under consideration at this point and that it was not necessary to postpone elections over the outbreak.

Normally a cheerleader for the U.S. economy, he acknowledged the possibility of a recession while brushing off another dramatic stock market decline as investors worried about the virus. The benchmark S&P 500 closed down 12% and the Dow 13% on Monday.

“The market will take care of itself,” Trump said, adding it would be very strong once the virus was handled. The president has long considered soaring stock markets to be a sign of his administration’s success.

Trump said the administration had talked regularly about domestic travel restrictions but hoped not to have to put such measures in place.

He said he thought it would still be possible for G7 leaders to meet at the Camp David retreat in Maryland in June. Trump upset European countries, which make up a large part of the G7, by instituting travel restrictions from much of Europe without consulting with those nations first.

Journalists and staff members had their temperatures taken before entering the complex. Reporters staggered their seating during the news conference, sitting in every other seat in the White House briefing room to implement social distancing measures. The White House has temporarily cut down the number of journalists permitted to come onto the complex on a daily basis.

NFL says April Draft still on. Closed to the public.

The NFL says it still plans to hold the 2020 draft as scheduled from April 23 to 25, but public draft events in Las Vegas will not take place amid ongoing precautions being taken because of the coronavirus.

"This decision reflects our foremost priority -- the health and safety of all fans and citizens," commissioner Roger Goodell said in a statement. "While this outcome is disappointing both to the NFL and to the Las Vegas community, we look forward to partnering with the Raiders, the City of Las Vegas and the Las Vegas Convention and Visitors Authority for a future NFL Draft as well as evaluating opportunities for other major NFL events in Las Vegas in the future, including the Super Bowl."

The NFL said in its release that it is "exploring innovative options" for how the draft will be conducted and that the event still will be televised.

On Sunday, the Centers for Disease Control and Prevention recommended that gatherings of 50 people or more in United States be canceled or postponed for the next eight weeks because of the coronavirus.

Penguins explore Shedd Aquarium during coronavirus closure. Gives the world a much needed break on the internet.

As coronavirus spreads across the U.S., Chicago penguins got the opportunity to see sights perhaps never before seen in the species’ history.

Because the city’s Shedd Aquarium was closed down to prevent transmission of the virus, the building’s penguins were allowed to roam free and explore other exhibits, discovering a whole new world just outside their enclosure.

“Without guests in the building, caretakers are getting creative in how they provide enrichment to animals,” the aquarium told the Chicago Tribune, “introducing new experiences, activities, foods and more to keep them active, encourage them to explore, problem-solve and express natural behaviors.”

Videos shared by the Shedd showed the flightless birds learning about their neighbors for the first time.

How the coronavirus spread from animals to humans?

As scientists work to contain coronavirus, researchers are still trying to figure out where it came from. Early research suggests human picked up the virus from animals, possibly bats, but it is still unclear how the virus made that jump. Science journalist and author David Quammen explains a term called “zoonosis” and how the disease may have spread from animals to humans.